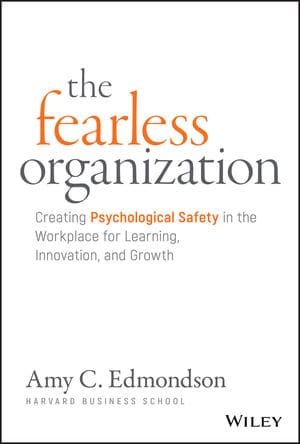 What is important about this book?
Edmonson has the great merit of officially making “fear” one of the strategic issues of corporate management.
The motivation is simple: given the complexity of our age, organizations can no longer afford (trivially in economic terms) to accept that fear limits the expression of their people’s talents.
The book stems from the author’s twenty-year research into what distinguishes the best performing teams from others.

Psychological safety leads to the belief that neither the official nor the unofficial consequences of taking relational risks (such as asking for help or admitting a mistake), constituting threat of punishment

Neuroscience research has shown that fear consumes physiological resources, taking away the parts of the brain that manage working memory and process new information, thus damaging analytical thinking, creativity and the ability to solve problems

Psychological safety does not mean building an environment where everything is fine, where people are not expected to aim for high-level results or to meet deadlines. It does not mean thinking you can make yourself comfortable

The hierarchy, or rather, the fear that the hierarchy, when not managed correctly, reduces psychological safety

Leaders have two basic tasks. They must build psychological confidence to stimulate learning and prevent avoidable failures; secondly, they must set high-level standards and inspire people to enable them to reach them

Structure and contents of the book
Psychological safety is not a “nice to have” element, but an essential aspect for any organization that wants to express all its potential and that of its people. Given the complexity of our age, we can no longer afford not to see the fear that inhabits our organizations and limits people’s contributions.
The issue of fear has always been a forbidden and taboo subject in organizations, because it is considered synonymous with weakness, vulnerability and inadequacy.
The nature of work has changed and today there are less routine, modular and predictable activities, while more and more tasks require knowing how to judge,  how to manage uncertainty, suggest new ideas, how to coordinate and communicate with others. Psychological safety is therefore intimately linked to the ability to make people and teams free to achieve their goals, ensuring a certain level of quality and performance.
In organizations where fear circulates, people often prefer to keep quiet rather than to speak up, whether it is to say “I don’t understand, I don’t know”, or to make a proposal, share an idea or a concern. The reason is that the fear of suffering the consequences prevails (ruining relationships with colleagues, antagonizing “the boss”, being marginalized in terms of career, or even being derided or, worse, fired).
Psychological safety allows sincerity, openness, and fosters authentic relationships and mutual respect.
Those who have tried the most innovative approaches such as teal, self-management or simply agile, will have noticed that they are all based on a level of collaboration and interdependence of people and teams that is simply unreachable without psychological safety, as people will ask themselves “why do I have to risk?”, “why am I even bothering?”.
The discovery of psychological safety is the result of many researches, which have involved organizations and companies from 30 years ago to the present, with the “Aristotle” project created by Google which has involved over 300 teams and 3,000 people for several years.
There is a rich and instructive documentation of real case histories that highlights the negative effects of the absence of psychological safety in companies and organizations such as Wells Fargo, Volkswagen, Federal Reserve Bank of New York, NASA, and as many cases where the introduction of the concept of psychological safety has contributed to the resurgence of companies such as Xerox, MTV, Danone, etc.

Contents and structure of the book
The book is divided into 3 parts:

Instructions for the reader
It is a clearly written book that presents the concepts in an easy way. The reading  is very fluent and for this reason it is necessary to pay attention to avoid “slipping away”.
The schemes related to the following topics are particularly interesting:

The book will be published in Italian by Franco Angeli and will be available from next September 28th.